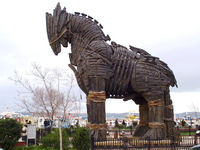 The Turkish Government announced 2018 "The Year of Troy" to commemorate the 20th anniversary of enlisting the old city of Canakkale on the UNESCO world heritage. UNESCO added the ancient city of Troy on its list of world cultural heritage sites in 1998 as the historical arena of the Greek Trojan War, which was described in details in the epic poem "Iliad".

This year will take place the opening of the new Troy Museum in the western Turkish province of Canakkale. The building is over 10.000 sqm and blends modern and ancient architecture. Among the exhibits are discoveries from the old city, as well as 24 gold pieces, known as the treasures of Troy, which were returned to Turkey from the United States after 125 years.

The Turkish government has invited many Hollywood celebrities to attend the opening. They include stars who acted in the 2004 movie "Troy", like Orlando Bloom, Brad Pitt, Diane Kruger and Eric Bana.

The Ministry of Culture and Tourism has also announced several events to celebrate Troy Year, including war simulations, symposiums and performances at the State Opera and Ballet. Moreover, the Troy international sports event is expected to attract athletes from all over the world to compete in various events at the city's historic site.