Iran’s "City Of The Mouthless" 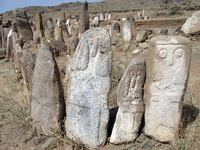 Situated near Pirazman village of Meshkin Shahr, in Ardabil province, Shahr-e Yeri is a unique archaeological site in northwest Iran, set to be turned into a "national heritage base", a status that may bring more attention to the ancient city sometimes referred to as the "city of the mouthless".

"The decision of establishing a national heritage base in Shahr-e Yeri was made after it faced many problems and followed warnings about the inappropriate state of the historical site," ISNA reported.

Shahr-e Yeri is one of the earliest settlements in Iran and is estimated to be more than 6,000 years old. It embraces an Iron-Age fortress, 3 prehistoric temples and 280 carved stones on which mouthless faces are depicted, all stretched across 400 hectares of several small hills.

It is thought these carved stones were used as totems, worshipped by the inhabitants of Shahr'e Yeri before the collapse of the city after it fell to the Urartians.

The majority of the megalithic tombs in the area were found empty due to illegal excavations. Shahr-e Yeri was inscribed on the list of National Heritage Sites in 1931.

Call for Papers - "Working Towards a Sustainable Past"