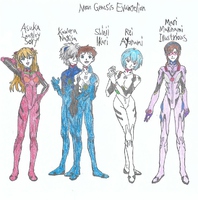 The Shimane Art Museum presents its first exhibition dedicated to anime, called the "Evangelion Exhibition". Hosted by The Asahi Shimbun and other organizations, the exhibition will run until July 9.

The exhibition includes about 1,300 items from the popular "Evangelion" series, including original illustrations and setting art.

At the prefectural museum, hand-drawn original illustrations and other materials used to create a scene from a feature film adaptation are shown in the order of the production process. Visitors can see the sophistication of the background art and other elements that may be hard to discern in the anime footage.

Learn more about the exhibition here